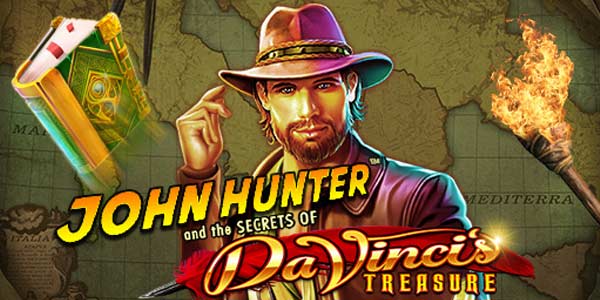 John Hunter and the Secrets of Da Vinci’s Treasure

One the greatest artists and inventors of all time is definitely Leonardo di ser Piero da Vinci, the Italian whose name is usually shortened to Leonardo da Vinci or simply Da Vinci. He was a brilliant genius who invented e.g. the helicopter and the solar panel. The mind of this great genius has inspired many movies and books, and now the mystery of Da Vinci has been made into a brand new video slot game by Pragmatic Play. John Hunter and the Secrets of Da Vinci’s Treasure is a combination of the mysteries in the novel The Da Vinci Code and the straight-forward action in Indiana Jones films.

John Hunter and the Secrets of Da Vinci’s Treasure was released in August and it offers classic video slot mechanics with a 3×5 grid and 25 win lines. The minimum bet is 1 cent per line, which means a total of 25 cents minimum for each round. The maximum bet can be raised up to 125 euros per round. With a betting scale of 0.25–125€, this game is suitable for both minimum budget players and high rollers.

With 25 winning lines, John Hunter and the Secrets of Da Vinci’s Treasure pays from left to right on adjacent reels, starting from the leftmost reel. Symbols familiar from playing cards, such as 10, J, Q, K and A, pay the smallest wins. Bigger payouts come from Da Vinci symbols such as the helicopter, the backpack and the invention book. John Hunter symbols represent the biggest payout, and with five symbols on the winning line, the win will be 32 times the bet.

The three bonus games are: Map Quest, Progressive Multiplier Free Spins and Prize Picker. In Map Quest Bonus Game there is a treasure map made out of 23 squares, and you move along on the map by spinning the wheel. The round starts from square one on the map and ends if the player hits “game over”. Progressive Multiplier Free Spins gives the player 12 free spins with a multiplier increasing by 1 on each spin. In Prize Picker the player can pick one of the three items shown to win.

John Hunter and the Secrets of Da Vinci’s Treasure is an interesting, adventure-themed slot that uses elements from the art world and adventure movies, and, of course, features the best slot mechanics out there. The maximum win is 48,000 times the bet so the jackpot is huge. This game has high volatility, which means the game pays out less often on average, but the chance to score big wins in a short time span is higher. The theoretical RTP for this game is 96.53.

Why don’t you jump into an adventure with John Hunter today at Chanz Casino?

Remember also that we currently running an exciting promotion together with Pragmatic games, where you can win a goldbar! Check more from Chanz.com!