Republic of Ireland is a beautiful Emerald country  located in northwest Europe. It is separated from Great Britain by the Irish sea. Currently it is the 20th largest island in the world and home for almost 6.5 million people. Its capital city is Dublin with almost 1.3 million inhabitants.

Languages spoken here are english and irish.  Ireland runs under democratic nation, and established their present constitution in 1937.

Ireland is known as the Emerald Isle, this is because of its lush greenery and rolling hills. The country receives a lot of rain each year, which keeps the grass green and the plants blooming.

Other facts of Ireland

The guillotine was used in Ireland before it was used in France. The earliest use dates back to 1307.

Croaghaun in Ireland is the second highest cliff in Europe.

The longest river in the country is the River Shannon.

Even though legend says that St. Patrick cleared Ireland of snakes, the truth is that these slithering creatures were never able to make it from Britain to the island.

Ireland is home to what could possibly be the oldest pub in the world. It was opened in 900AD.

The Titanic was built in Belfast, Northern Island.

Our staff visited the Wicklow mountains area and did some hiking there in april 2019. As you can see from the pictures, weather was quite cold and damp, so Ireland is maybe not the ultimate travel destination for sunny/beach seekers. It is very easy to travel to Ireland, it is the main base for Ryanair, and many countries all over the world have flights directly to Dublin. From Dublin airport there is good connections to the rest of the country by bus, flight or trains. 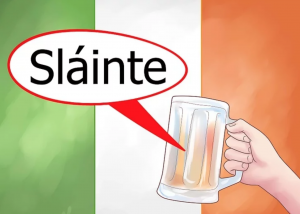 In Ireland you will have the time of your life! Pubs and restaurants are everywhere! Just popin for a pint of Guiness and maybe some traditional irish meatpie or stew? Dont be scared if the locals in pub will come and talk to you, Irish people are very friendly and wants to know more about the tourists visiting the country. Pubs and restaurants are place where you go to socialise and make new friends!

Currency used in Ireland is Euro, and you can find atm’s everywhere, and Visa&Mastercard are widely accepted everywhere. If you need to change currency, its best to do in the bank since they offer the best rates. Remember to check the opening times, sometimes banks are closed during the lunch times, or do not handle cash after 1-2pm.

Public transportation is in good order here. In Dublin you can use the extensive bus, tram or train network. When travelling with the bus, you can buy a single ticket from the driver in cash, but you wont get any change. For tram and trains there is kiosks at the stations selling tickets. You can also purchase daily/weekly/monthly passes if you staying there longer period of time. There is also regular ferry connections to the UK.

Thats all for now, enjoy the pictures below!

Pictures below are belonging to Chanz / Dreambox Games OU and all kind of use is prohibited without prior agreement with us.