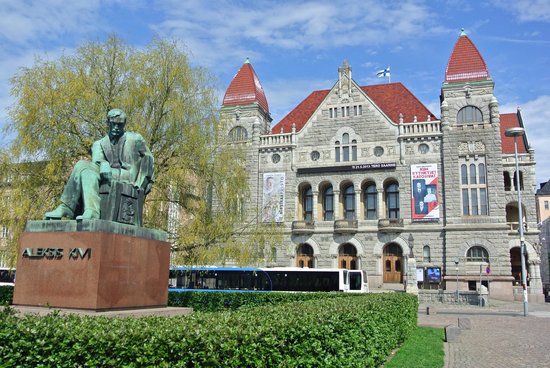 The Day of Finnish literature

Today is a national flagday in Finland, when the finns honour both Aleksis Kivi Day and Finnish Literature day.

Now its a good time to to read something written by a Finn, in original language or via a translation.

Although Kivi was amongst the very earliest authors in Finnish, he is still concidered one of the greatest.

At first, the brothers are not a particularly peaceful lot and end up quarreling with the local constable, juryman, vicar, churchwarden, and teachers—not to mention their neighbours in the village of Toukola. No wonder young girls’ mothers do not regard them as good suitors. When the brothers are required to learn to read before they can accept church confirmation and therefore official adulthood—and the right to marry—they decide to run away.

Eventually they end up moving to distant Impivaara in the middle of relative wilderness, but their first efforts are shoddy—one Christmas Eve they end up burning down their sauna. The next spring they try again, but are forced to kill a nearby lord’s herd of bulls and pay them back with wheat. Ten years of hard work clearing the forest for fields, hard drinking—and Simeoni’s apocalyptic visions from delirium tremens—eventually lead them to mend their ways. They learn to read on their own and eventually return to Jukola.

In the end, most of them become pillars of the community and family men. Still, the tone of the tale is not particularly moralistic.

Here are the most famous books in english that has been translated:

You can find more of his products, and even download some of them from project Gutenberg pages here.