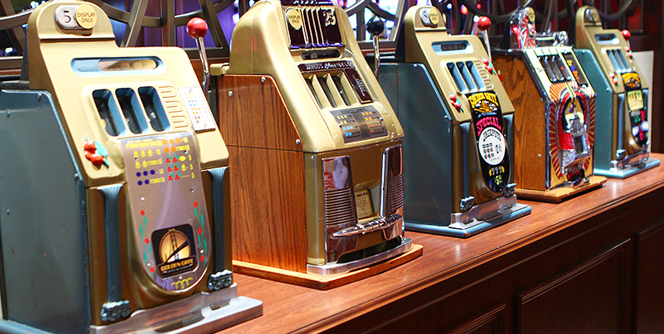 Who invented the 1st slotmachine?

Many people believe that the first slotmachine was invented by Charles Fey around 1895. It consisted of three spinning reels containing a total of five symbols, Horseshoes, diamonds, spades, hearts and a bell (Liberty Bell), from which this machine took its name.By reducing the symbols in the reels, he was able to develope a machine with automated payout system. Liberty Bell was a huge success, and a new era of slotmachines and massproductions did begun.

These gentleman developed a slotmachine, that was a precursor for modern machines. It was based on poker and had 50 card faces and 5 drums. This machine didnt have a direct payout system though, so for example 2 pairs gave you a free beer etc in the bar. The awards were completly dependant where the machine was installed.

The first true electronic slot (video slot) was developed in 1976 by N. Cerracchio, R. Greene, W. Beckman, J. Reukes, and L. Black in the company Fortune Coin Co., Las Vegas, NV. This slot machine used a modified 19-inch color screen of the Sony boards and software for all machine functions. The original machine was incorporated in a cabin – slot. The first video slot machine was placed at the Hilton Hotel in Las Vegas and after some security modifications against cheating of the machine; it got approval from the state of Nevada

Now there is all kind of slots and games, and most of them are based on highperforming computers and graphics with lots of functions. Some of them are online, but there still is a huge number physical machines in casinos all over the world, and it will propably stay like that!

Chanz has several hundreds games from different providers, so maybe its time to take our Welcome offer and check them out!