Im sure most of us know what sumo wrestling is. Now you can even play it as slot with a new release from Yggdrasil. You can get to yourself familiar with the dohyō (ring) using your computer or tablet/mobilephone.

Yokozuna Clash is played with 5 reels and 243 ways to win both ways. It will invite you to a Sumo Tournament that has some action with collosal men who are using their mass to force opponents out of the ring. Your task here is to defeat your opponents and become the Yokozuna which translates to Grand Champion. This slot can be played with values from 0.10 EUR – 125 EUR.

This slots reminds us of an videogame, that will engage the player with animations and graphics. As something new here, Yggdrasil has abandoned the traditional coin value which is good news. They simply display the cash value relative to your stake. Well done!

This slot has freespins feature, but it also has some random features

Sumo Clash feature activates when you get 5 of a kind. This will show you 2-4 extra symbols of the highest symbols, which are then added to the reels. It will then award you a higher payout than the original one

Tournament Freespins will initiate when you get the scatter to first and last reels. This will then assign you Riku or Haru to fight a random opponent. The fighters have own unique powers (wilds or multipliers) for you to benefit, and they are added to the reels during the freespins.

We really like the features here, and most importantly the removal of the coins. All game providers should do this, it is just so annoying to try and figure out how much you have won. Now you can simple see your win in your currency. Test this game when its released at chanz.com! 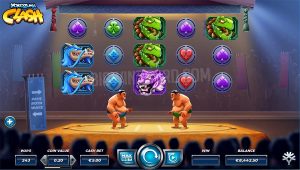