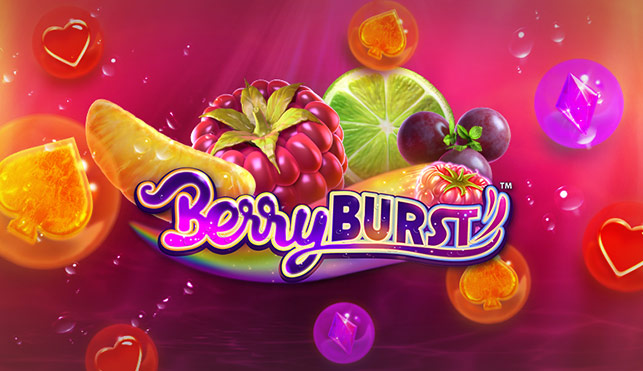 NetEnt is probably one of the best-known video slot producers in the world. NetEnt has been in the business for 20 years, and during that time, the company has released hundreds of great casino games, such as Gonzo’s Quest and Blood Suckers. Probably the best-known game by NetEnt is Starburst, a classic space-themed slot that offers a minimum bet of 0.1€ and has ten win lines which pay in both directions.

After the release of Starburst in 2013, casino game enthusiasts have been waiting for a sequel to this ultra simple game. This Autumn, the long wait was awarded and Berryburst was released. Surprisingly, Berryburst doesn’t have a space theme, not even close. NetEnt has taken it back to the roots of slot machines and released a game which features the most classic elements in slots: berries and fruits.

Berryburst’s game mechanics feature a 5×3 screen and cluster paylines which pay in both directions and also in the middle of the game screen, from left to right and right to left. The minimum bet for this game is 0.1€ and the maximum bet for one round can be raised up to 200 euros.

Berryburst has a Cluster Pays mechanism you may know from other recently released NetEnt games such as Aloha! Cluster Pays means that winning combinations can appear anywhere in the 5×3 grid, meaning there are no traditional win lines in Berryburst. To win, the player needs to get at least five symbols attached to each other. The maximum amount of adjacent symbols is the full grid, 15 symbols.

Berryburst is a pretty straightforward game without any separated bonus game. The game features expanding wilds that can appear on any reel. Whenever a wild appears, the player gets a free spin. It’s possible to get up to five wild symbols. When this happens, the player gets the biggest payout of the game, a 500-time payout for all the lines he or she has bet on.

Berryburst and Berryburst MAX are improved berry and fruit themed versions of one of the most popular slot games of all time, Starburst. What separates Berryburst from Starburst are the Cluster Pays and expanding wilds on all reels. Starburst has only three wild reels – reels 2, 3 and 4 – but in Berryburst, the expanding wild can appear on any line and even on all five lines. Cluster Pays means that winning combinations don’t have to be connected to winning lines. The player wins as long as the five symbols are somehow connected to each other, anywhere on the 5×3 grid.

Berryburst is one of the most anticipated games of this year and you can find it at Chanz Casino. Why don’t you give the delicious berries a try already today?